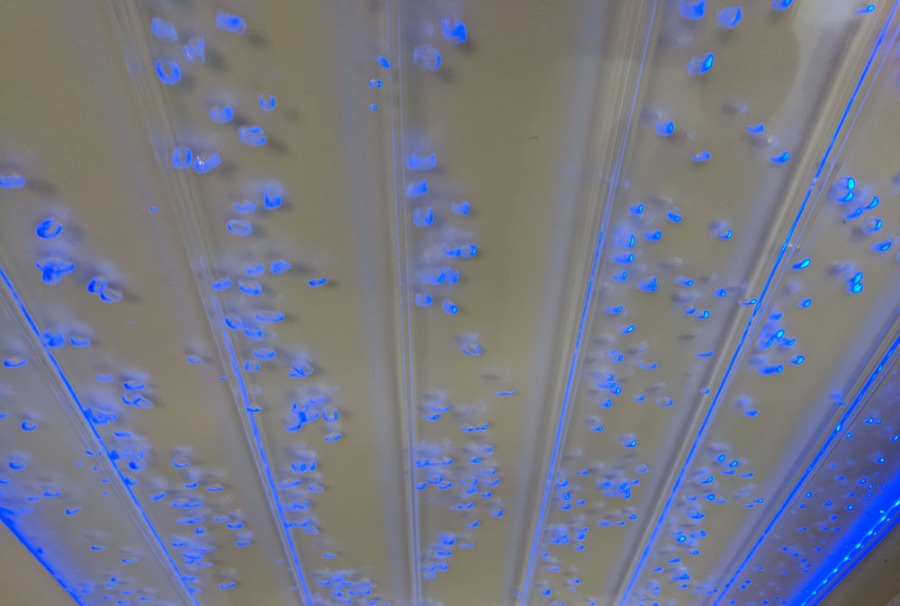 Originally published in the 2008 summer edition of the Cimarron Review, Christine Marshall’s “Sweat“ discusses a subject that most readers can relate to. The ten stanza, free verse poem was selected to appear in the 2009 edition of The Best American Poetry.

My first thought about “Sweat” was similar to that of the quote that introduces the text: “I think it is gross when girls sweat.” Humans commonly associate sweat with the gym, sports, and stress – all major topics that are well associated females. So instead of it being gross when girls sweat, shouldn’t it just be gross when we all sweat?

Perspiration (a polite name for sweat) is defined as the process in which “moisture [is] exuded through the pores of the skin, typically in profuse quantities as a reaction to heat, physical exertion, fever, or fear.”

Wow, what an inspiring definition! Dictionary.com has really encouraged me to go out and seek the “brine, and vellum of slog” state that encompasses sweat… not.

There is beauty in sweat though, but it seems to get over shadowed by physical results. As former New York Yankee 3rd baseman Alex Rodriguez once said, “Enjoy your sweat, because hard work doesn’t guarantee success, but without it, you don’t have a chance.” Mr. Rodriguez may have had a couple of extra chemicals helping him sweat, but no doubt, his quote remains true.

Sweat carries with it a result. Whether good or bad, there is always a takeaway when sweat occurs.

(THE GOOD) ‘Twas Saturday, October 9th. The year was 2015, the 3rd period of our hockey game versus the Wonderland Wizards and we were in for a barnburner. The score was 0 and the shots were 53-12, in favor of our opponent. I was playing one of the best games of my life and was drenched in sweat. The thing is, I absolutely loved it. There is an indescribable feeling of focus and confidence that sweat incites – one that no reference site (especially Dictionary.com) can define.

I had a feeling during the third period that there was no way I was going to allow a goal past me. It was like Trump had built a wall in front of the net, but Trump’s Wall fell about 12 minutes into overtime and our season was over. If that doesn’t foreshadow our nation’s future then I don’t know what does.

The “wash of chemicals” that is sweat can be seen as a positive attribute in this sense, but when there is a positive, there is always a negative.

(THE NEGATIVE)  Lie, lie, lie, lie, lie… Everyone hates those who lie. One of the easiest ways to tell if someone is lying is whether they are sweating or not. I was watching an NCIS episode a couple of weeks ago,and when they were interrogating the suspect, he began to sweat and get twitchy. This caught the agent’s eye and was one of the main reasons that the detectives suspected the suspect of lying. Although not truly a negative thing, it does not put you in a position for success as a liar.

One example of a personal negative would be during tests. I’m usually pretty confident going into assessments, but when I start to sweat, I immediately know that I’m shaky about my knowledge. That causes me to become nervous and rush through the test. It’s never fun to feel like this during a test.

As I think about what I learned from this poem, the common English class saying, “don’t judge a book by its cover”, enters my head. Marshall describes that sweat is commonly viewed as disgusting, especially for women. However, she challenges this stereotype, depicting the positive impacts she receives from sweating. She allows the reader to interpret the poem and attempt to apply it to his own life. I now understand the positives of the act of sweating. Next time I’m drenched in sweat from “a million invisible exit points”, I’m going to think just a bit harder about what I achieve from it.