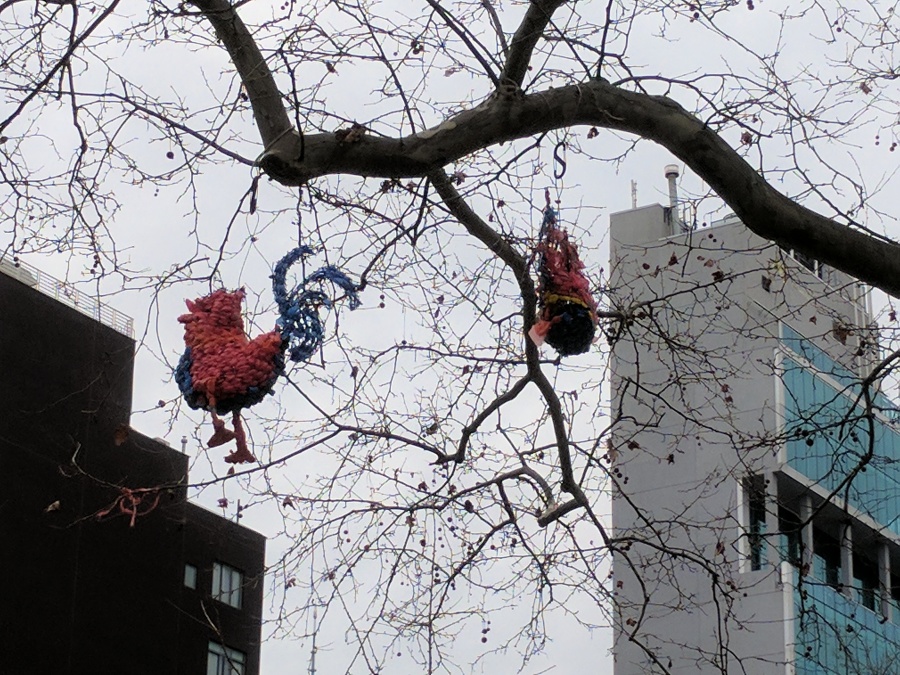 As I was flipping through my 2004 Best American Poetry edition I came across the poem “Chicken” by Kim Addonizio. This poem caught my eye because unlike the other poems in my BAP it wasn’t just a good poem, but it was a great poem. Kim Addonizio takes the frequently used riddle “ why did the chicken cross the road” and gives a deeper meaning to it. This riddle is so often used that we don’t even think into it that much when it is said.  Yes, the chicken crossed the road to get to the other side, but why did she want to get to the other side. In her poem, Kim propels us into a deeper consideration of existential realities and of our inherently conflicted relationship to poultry. Through her writing she calls to our attention the crime of caging animals and killing them and how wrong it is that we still continue to do it. Kim also continues to analyze the poem even more by pointing out to the readers that if the chicken were not caged up by humans it would have the capability to be free.

This poem is great for several reasons. The poem starts off great because it draws the reader in with a question, one that many of the readers are familiar with, “why did the chicken cross the road?”. Right off the bat it is very clear what the authors opinion is which is crucial for a poem to be considered a good poem. This poem is very opinionated because you know that the author is against caging animals and killing them. She brings up a societal real life problem and addresses that there is something wrong with it. She doesn’t directly mention what the real life problem is but by reading the poem you can infer it. Another very important attribute to the poem is the reference that she uses in the poem. She relates the chicken escaping his cage to a convict escaping jail. This paints a picture in the reader’s mind and gives a comparison to the brutal actions toward harmless chickens. The difference is that the convict gets away with the escape and the chicken does not and in the end the convict makes it to a farmhouse where kind people feed him, feed him the chicken. This is ironic because even though the chicken did nothing wrong and the convict did, the chicken is the one who is being punished.

Another quality that makes Addonizio’s poem so great is her use of language throughout the poem. The line “ God knows how she got out. God sees everything” is a very powerful line. Her mentioning of God shows the importance and significance of the poem. Acknowledging that “Only God Knows” only further emphasizes the absurdity of poultry. Addonizio use of swears also show her passion throughout the poem. Reading the poem, you get the impression that the author is angry and upset because of how she chooses to write the poem using swear words. The Poem becomes somewhat persuasive through her use of language.

This poem also caught my eye because it was accessible yet there was plenty of room for interpretation. One of the main reasons I think Addonizio made her poem manageable to understand is because she wants her readers to take into account what she is saying without to much difficulty. Addonizio achieved this by having the perfect length to her poem. The poem was not too long nor was it to short but it was just the right length. In my opinion, when poems are too short they are not conveying what they want to say to the readers and when poems are too long they tend to get carried away with what they’re saying. The style of the poem always is also a big part of why this poem is so great. It has the traditional style of a poem with four lines to each stanza. I think this is crucial to have in a poem because it is simple and doesn’t distract the reader away from what the poem is meant to be about.

The poem “Chicken” by Kim Addonizio is truly great because it presents to its readers a clear message through creative writing and interesting ideas. The title of this poem really stood out to me because it is somewhat of a witty title. Many of the poems that I have read before have a serious title but this one portrays a title that has a lighter mood by also giving the reader a serious message. Overall the wonderful attributes that make this poem great are endless.

Here is a video of me reading “Chicken”: