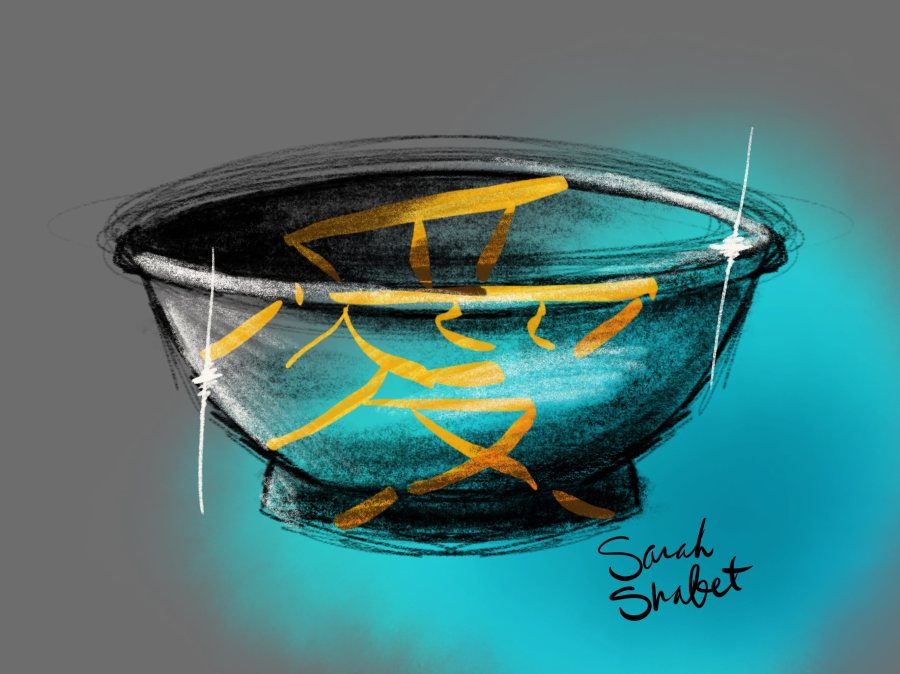 “Kinstugi is the japanese art of mending precious pottery with gold”

Mending the broken. Sometimes it’s simpler just to throw away the fragments and find something new to love instead. Sometimes, though, on those monumentally rare and precious occasions, the kinds we treasure forever, we find something worth fixing. Not just worth the trouble and effort of gluing the pieces back together, no, not just worth mending the delicate, shattered, mosaic of scrambled images, placing them all back together in their original orientations, fitting cleanly like puzzle pieces and joined so smoothly that no single piece protrudes above any other, pouring countless hours into reconstructing the entire image perfectly until it resembles the original flawlessly, but worth doing all that, and joining the seams with solid gold, making the repaired piece an artwork more splendid than it was originally. When we find something that precious and it breaks, do we really have any other option?

Boch says that “we,” not “I,” are the ones to mend the pottery. That fixing these broken bonds is something to be done together. That they, the “we,” thought their bond was flexible, yet it broke, but they sat down and made it even stronger and more beautiful by replacing the broken pieces together. That’s love. Working together to fix the broken pot instead of blaming each other for dropping it or trying to take the moral high ground by claiming to have found it.

I made a mistake. Pottery isn’t found; it’s made. We can’t walk up to a potter’s wheel and expect to find a fully formed work of art waiting unclaimed for someone to take it home. It needs to be made by someone. So this someone comes along and the pot is sculpted and molded. The artist toils over the clay until it is deemed worthy. But will it survive the kiln? Or will it fail to be hardened by adversity and shatter into partially fired pieces that exist forever in a state of being half-baked?

A common syndrome I’ve observed in artists, myself included, is that they initially love the piece they’re working on. However, as the days wear on, they rapidly fall out of love with it. They grow sick of it, and all of its imperfections seem glaring and unfixable. These pieces tend to be abandoned, or if they are finished, discarded because they’ve become something to loathe, an object the artist’s vented their frustrations on. If one of these pieces were to break, the artist wouldn’t lose any sleep over it. Out of sight, out of mind, swept into a trash can and forgotten. But if those countless hours forged not only a piece of pottery but something loved and precious, then if broken, the artist wouldn’t have a choice but to fix it.

Bloch, in the lines “What’s between us” and “is made of clay” states rather explicitly that the pot in question is the relationship or bond between her and her partner, though perhaps there is more to it than that. Consider the hypothetical artist from before. The creation of this piece is an individual activity. The artist sculpts the pot and pours their soul into it. Perhaps the pot is Bloch. She’s built herself and tirelessly molded herself into the human being she became. Then someone comes along. Someone so amazing that everything she thought she was shatters. This new person redefines her, putting her back together in her original form but with traces of something else woven inseparable from her very being, making her all the more beautiful. Their bond is this new piece, the joined shards of pottery with shining cracks of burning gold making the imperfections all the more beautiful.

They say when a chain breaks, the part that is mended becomes the strongest. They also say a chain is only as strong as the weakest link. How many times must the chain be broken and fixed before it is strong enough? Pottery is fragile and shatters if dropped on a hard surface, but gold is malleable and will dent but not crack. The joining of these two mediums with such different properties into something so beautiful and strong is the real bond. You wouldn’t call gold powder and a ceramic dish “at one,” but kintsugi is the epitome of “at one”-ness.